A new and exciting computer accessory appeared on the market just a  few years ago. It's called an SDR, short for "Software Defined Radio." Basically, an SDR enables you to use your computer as a radio frequency receiver, but its full range of capabilities goes far beyond that, and for the amateur scientist community these things are nothing short of revolutionary. SDRs are available in a USB dongle configuration not much bigger than a flash drive and costing less than $25. More advanced versions are available in the $100 and up range, but even the most inexpensive dongles, used in conjunction with a computer, a simple antenna, and some freely downloadable software, can provide you with a piece of research equipment the likes of which could not have been obtained by anyone at any price until now.

SDRs can tune across an amazingly wide range of frequencies in a variety of reception modes, but even more amazing, the software that enables the SDR to work its magic can perform a mind-boggling array of audio and visual permutations to help perform detailed analysis of the signal you are tuned to - its relative strength, waveform characteristics, effects from adjacent frequencies and background noise, etc. You can listen with speakers or earphones, just as you would a conventional radio, but the radio frequency activity also appears on the computer monitor as an ever-changing graphical display of the spectrum. So, in a sense, an SDR can actually enable you to "see" radio waves and to learn about things going on within the luminiferous aether like never before.

Clever experimentalists have come up with all sorts of ways to ustilize SDRs that go beyond simply listening to radio broadcasts, and of special interest to UFO research has been their use in such things as observing airplane traffic, satellites, and even meteors. These observations involve a technique known as "passive radar" in which an observer monitors the signals from ordinary radio or television stations to detect the effects that fast moving high altitude objects can have on those signals. For example, when the ionized trail of a falling meteor crosses the path of a terrestrially broadcast radio wave, a distinctive audible sound called a "ping" can be heard on the receiving end. Falling meteors and many other atmospheric and ionospheric related phenomena can be studied in terms of the characteristic audio and visual effects they produce when using an SDR receiving system. (Here's more about how this works with meteors.)

So what about UFOs? Why can't similar techniques be used to look for UFO activity? Of course, for a computerized UFO radar system to succeed it's essential that our chosen targets exhibit some type of interaction with radio waves, either directly or indirectly, and we have plenty of evidence suggesting that they do:

Everyone familiar with the history of UFO reports since the mid-20th century knows that radar sightings played a significant role in the early development of both the public’s interest and the government’s refudiating stance concerning the UFO situation. Ever since the days of World War II,  UFO radar sightings have been made by highly trained and often government sanctioned observers using some of the most sophisticated electronic equipment ever designed. These radar sightings could not be discounted as easily as random personal accounts which, though more numerous, could always be explained away as mistakes arising from confusion, illusion, and/or delusion on the part of ordinary citizens. In addition, the UFO literature includes numerous reports about sightings that occurred in conjunction with disruptions to ordinary radio and TV programs. In fact, many types of electro-magnetic effects have been attributed to UFOs over the years, so there is ample reason to believe that a "true" UFO (i.e., an extra-terrestrial or extra-dimensional craft) could be detected by looking for some unique characteristics of its impact on radio wave transmissions.

Let's take a look at the specifics of how such a detection system might work:

A conventional radar system, the type used for tracking military and commercial aircraft, consists of a dedicated transmitter which sends out a highly directional pulsed radio frequency beam that is reflected back towards a receiver when a plane flies within range of the beam. These reflectied signals, usually referred to as echoes, can be observed as "blips" on a monitoring screen and, with some very sophisticated electronic wizardry, observers are able to measure the time shift between transmission of the radar beam and reception of its echo to determine distance, velocity, and other factors pertaining to the aircraft. In most installations the radar transmitter and receiver are located within the same facility, or at least in close proximity, and often share the same antenna.

A passive radar system, however, does not employ its own dedicated transmitter. Instead, it utilizes the ever present transmissions from commercial radio and TV stations as its reference signal. It turns out that digital television signals are very well suited for this application so there is no shortage of potential "radar beams" to be monitored. Don't worry though, we're not suggesting that you actually watch the shows being broadcast, but simply a component of the raw digital signal - namely the "pilot signal," which is a specific frequency embedded within the channel's broader transmission. (It's the spike towards the left edge of this graphical image of a UHF TV channel 33 waveform.) In addition to the SDR dongle mentioned above, a complete monitoring station would consist of a simple antenna plus the cable and connectors to hook the antenna to the SDR, along with a computer and the necessary software. All of this (assuming you already have a computer) can be acquired for less than $50.

The ultra-simple system we're describing here has the advantage of costing a few million dollars less than a conventional radar installation. It also has the advantage of being able to observe activity from different directions and at different distances simultaneously. Most importantly, it places a powerful new tool for studying UFOs within everyone's reach.

By simply letting the computer/SDR "radar system" run, and then observing (and/or recording) the incoming signals over a period of time, you will soon learn what is "normal". Several factors will routinely impact or accompany the monitored signals from day to day, such as passing airplanes, as well as some fascinating atmospheric effects, but what you will be searching for is something completely different. Some anomalous signal trace that can only be explained by a cause that fits the typically reported pattern of UFO behavior (extreme speed, sudden changes of direction, or a general disturbance within the normal space-time-gravitational field.) With a little computer savvy, some experience, and yes, a lot of patience, we believe thaty anyone seriously interested in UFO research could make some major scientific breakthroughs with this approach..

So, what we're proposing is that a global network of observers using SDR enabled computers will monitor the airwaves for signs of unusual activity therein, while also being on the lookout for reports of visual UFO sightings within the same geographical area. Our goal will be to correlate these two types of observations and ultimately discover some charcteristic "signature" that a UFO  can be expected to display on our home-brew radar screens. This opens up all sorts of exciting possibilities, including real time detection of UFO activity in a way that can alert others in the area to put their eyes to the skies, and eventually to help unravel some of the enduring mysteries surrounding UFOs.

This is ground-breaking work that will take some serious time and effort. We believe this would make a great group activity, a student project, or perhaps the basis for an upcoming Nobel prize. It's just in the preliminary stages at this point, but if you think you'd like to get onboard with this new UFO detection system in any way please let us know. We'll keep you in the loop as things develop.

If you would like to learn more details or share your thoughts and suggestions please send an email to: jim@gobeondnow.com


UPDATE: October 2018 - We've just learned that our preferred source for SDR dongles is planning to release a new version specifically designed for passive radar applications in the near future.
Stay tuned for more . . .

The images below are a series of screenshots taken during September 27/28, 2018 while monitoring pilot signals for UHF TV channel 31 from my location in central Virginia. Each image covers about 1 hour of observing time. The entire group spans about 16 hours and shows an interesting variety of activity.

The horizontal bands represent the actual television transmission signals being received during the time frame. Note the variations that occurred over the course of the day (from a little before midnight through mid-afternoon). The numerous vertical and diagonal streaks represent reflections from normal aircraft that passed between the transmitters and receiver. The first image also shows some heightened background noise activity (the bluish areas overlaying the horizontal TV signals) possibly caused by nearby storms.

The last image contains a curious arcing parabolic formation that doesn't look like anything I've seen before or since, after hundreds of hours of observing with this method.
Could it have been a UFO?
The first screenshot covers the time period from just before 11 pm (23:00:00) until midnight (00:00:00) on September 27, 2018.  Note the date and time stamp indications shown at 10 minute intervals along the bottom of the chart. Here we see 4 continuous horizontal bands which represent the pilot signals from several different UHF TV transmitters. The vertical and diagonally curving streaks are caused by airplanes crossing the paths of the TV signals and causing "out of phase" reflections that show up slightly above and below the direct signal's frequency as the planes move into and away from the transmitted beam. Areas of heightened background noise are seen as hazy bluish splotches, possibly resulting from thunderstorm activity in the area.

In this second screenshot, taken a few hours later (about 5:00 - 6:00 am), we see less airplane traffic, less background noise, and also notice that the lower TV signal has diminished in received strength. A peculiar "burst" of green pixels appeared at about 05:38 slightly above the top TV signal - possibly a meteor? 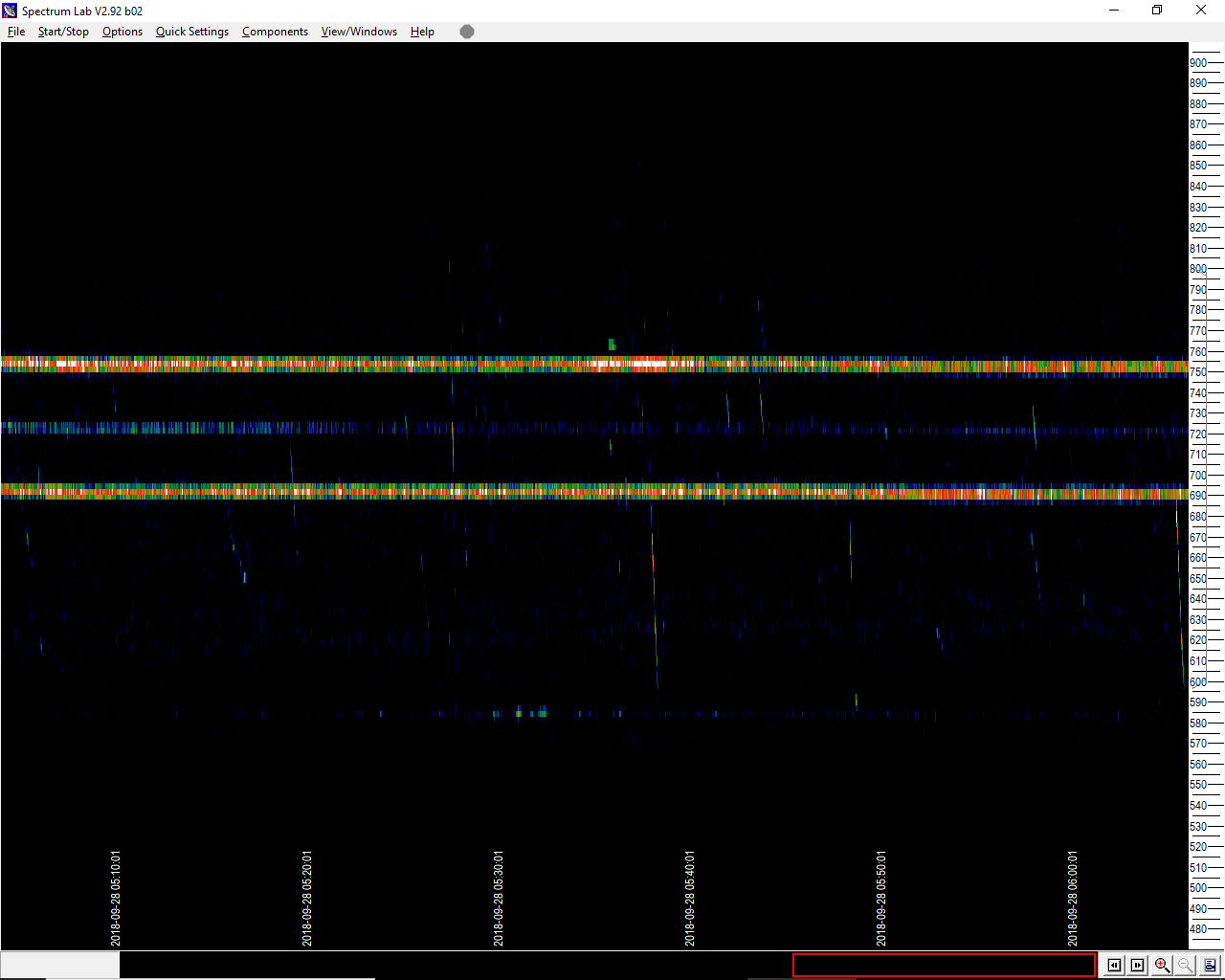 After 6:00 am the fourth TV signal had all but disappeared completely before making a strong comeback just before 07:00. Airplane traffic is steadily increasing, and two more atypical "bursts" appeared at about 6:12 and 6:30. Contrary to common perceptions, meteor activity is generally higher in the early morning hours, so these sudden and short-lived bursts could well be meteor echoes, but they might just as well be from something less common. Corroborating sighting reports could help resolve the question. 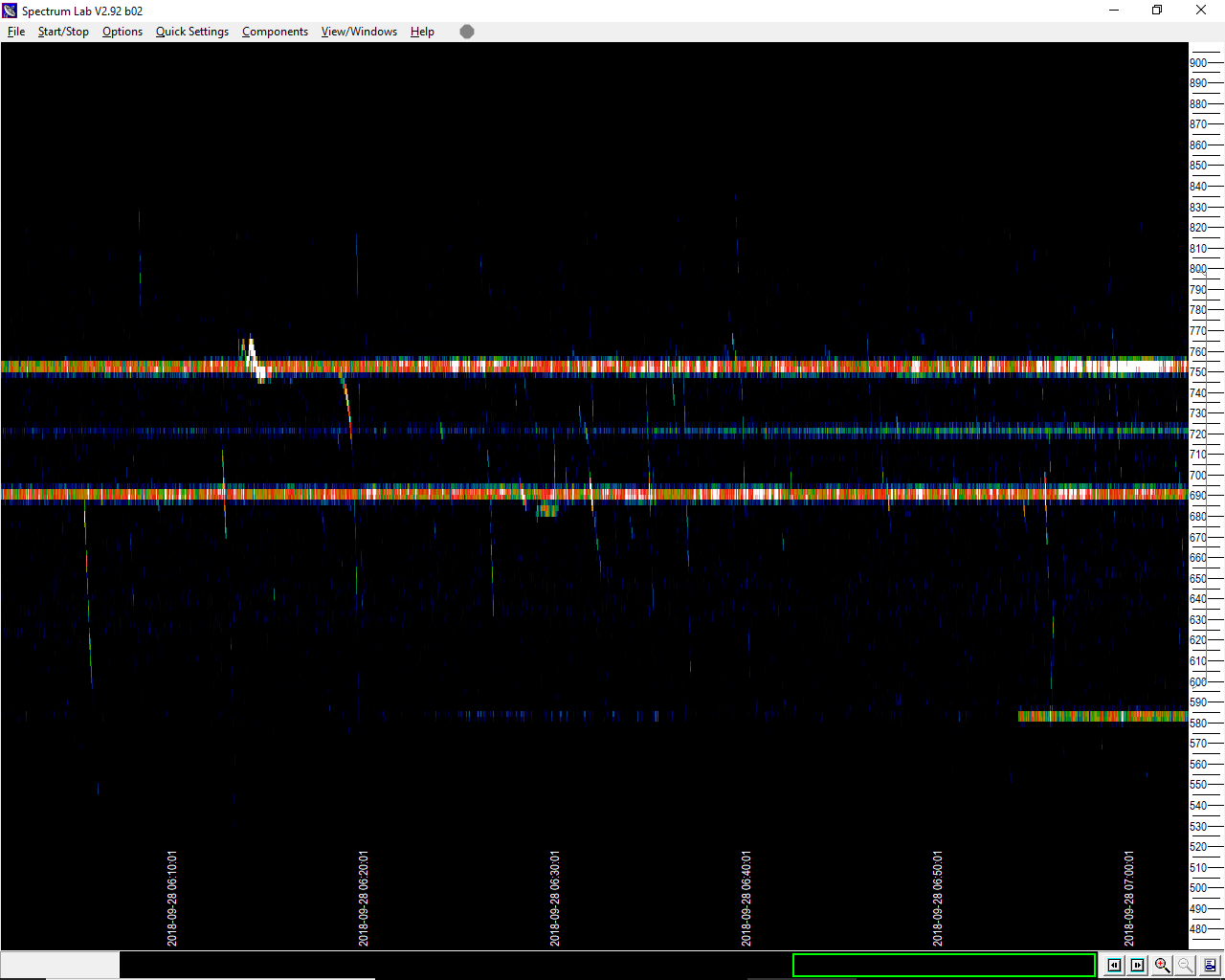 In the last screenshot of this series, covering the afternoon period from about 2:25 - 3:35 pm, we see a constant flurry of airplane traffic and that the lower UHF TV signal has dropped out of range. The anomalous parabolic (or "backwards N") formation that begins just after 3:00 pm and hovers for about 10 minutes is unlike anything I've observed before or since. What could it have been? 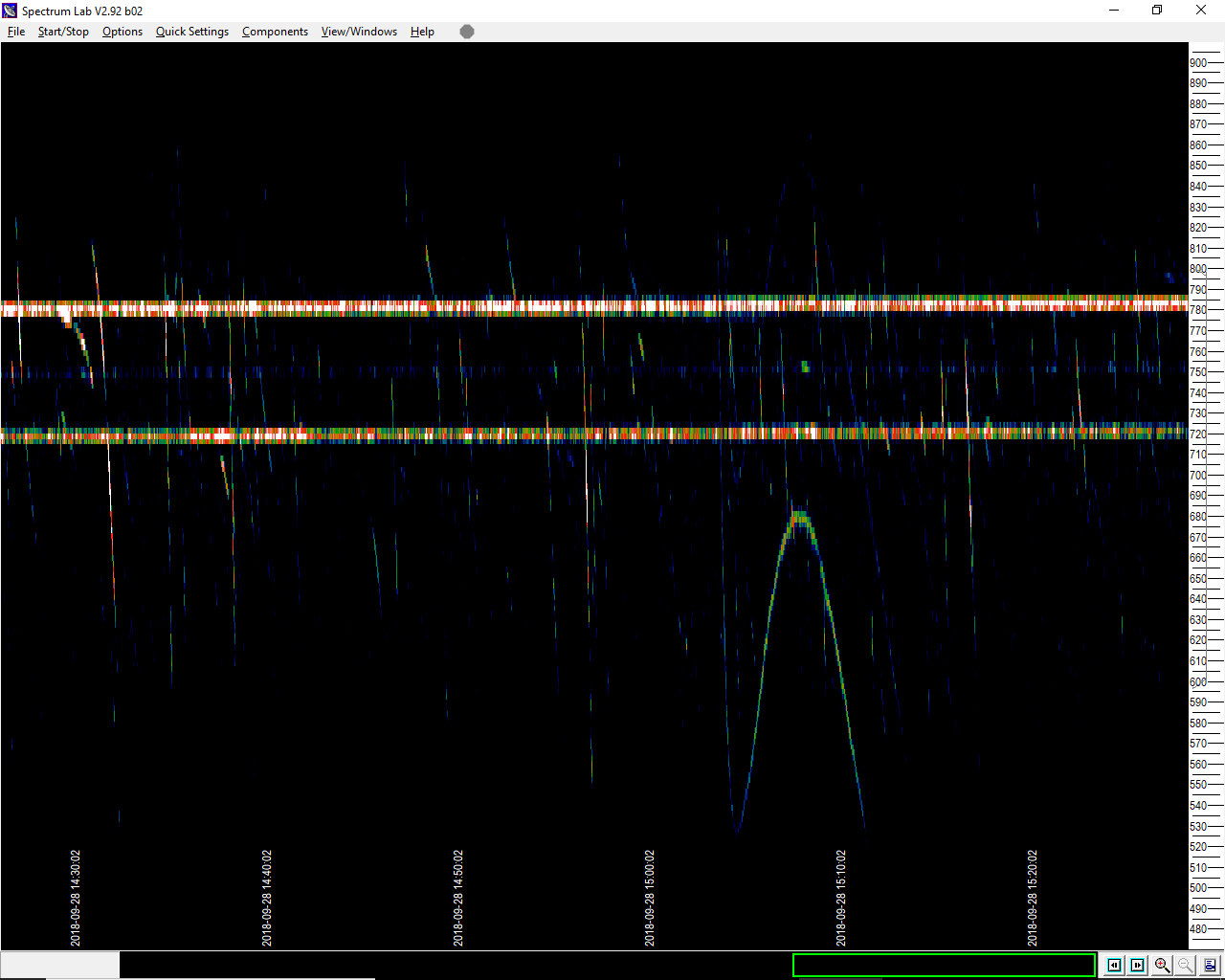